We are delighted to invite you to attend a concert featuring our very own Cantabs: Stevie Wishart and Robin Walker on Friday 2 June, at 19.00 (Holy Trinity, Rue Capitaine Crespel 29 1050 Brussels). Tickets are 10 EUR and include a drink & pre-concert talk. To book visit www.ipswichchoralsociety.eventbrite.com. All are welcome, paid up members get a 5 EUR subsidy (please let us know socsec@camsoc.be or secretary@camsoc.be if you wish to use this subsidy).

Music for a Summer’s Evening

Ipswich Choral Society, established in 1824, is in Belgium for two days in June to perform the première of ‘Summer’ by Stevie Wishart as well as a selection of treasures from the English & Continental choral tradition.

Their conductor Robin Walker is director of music at Corpus Christi College, Cambridge where he directs the Chapel Choir and is also a well-known performer in his own right having performed across Europe and the USA, giving workshops and master-classes on Early English music and the wide-ranging organ repertoire. He has recorded on the 1734 Baroque organ of St Giles-in-the-Fields, London, and on the 1558 Zefferini organ of La Badia Fiorentina in Florence. He has just conducted a magnificent performance of Mendelssohn’s Elijah with the Ipswich & Halifax Choral Societies to a capacity audience at Snape Maltings, Aldeburgh in Suffolk.

Stevie Wishart who studied at New College, Oxford with a Vicente Canada Blanch fellowship, and more recently as a Visiting Fellow at the University of Cambridge, will be there on the night to talk about the unusual situation of being a living composer and how she has created pieces we will hear in the concert which have come out of her special relationship with Ipswich Choral Society. She has composed for modern orchestral and vocal groups throughout Europe, Australia and the USA with performances including the Sydney Opera House and Festival Hall, London but the more innovative alternative and electronic music scene is equally important as improvisation is at the core of her work. She has also successfully collaborated with other creative artists including Compagnie Michele Noiret at the National Theatre, Brussels, and for the designer Philippe Starck in Paris. ‘Summer’ is part of Stevie’s broader composition ‘Cantata for the Seasons’ which included a poem given by the former Archbishop of Canterbury, Lord Williams of Oystermouth. Her music commissioned by the BBC Singers for the BBC Proms, London was described by Hilary Finch in The Times as “a bridge between heaven and earth”. 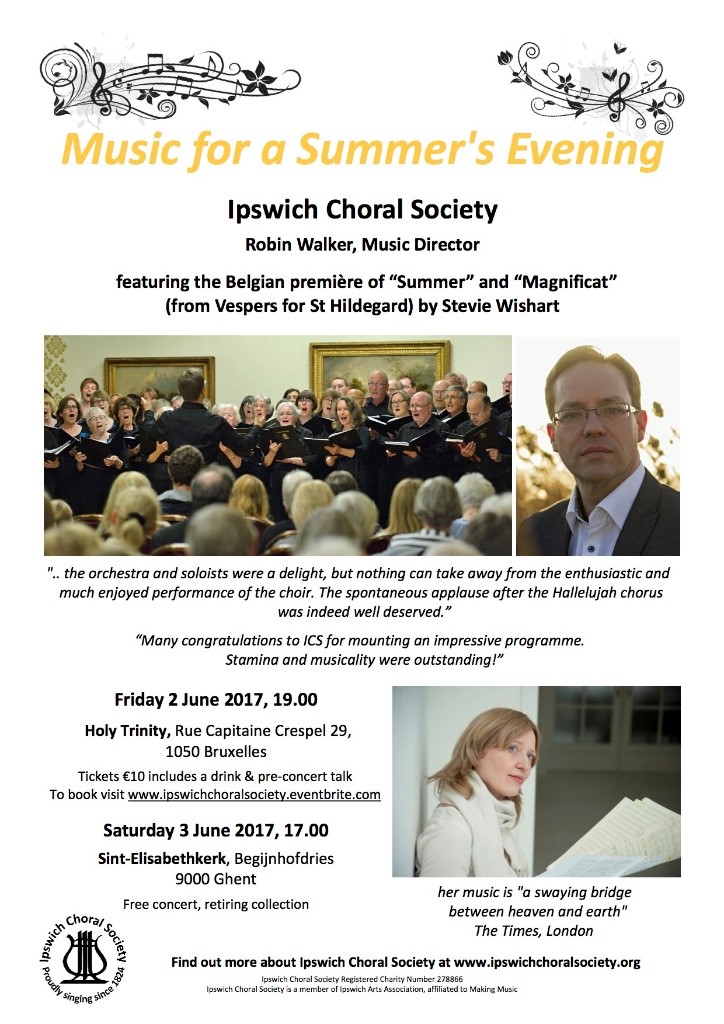